Europe has proven that it’s impossible to eliminate the use of fossil fuels without hydrogen and has published a manifesto for transitioning its economy to hydrogen.  The paper is available on the internet: “50% hydrogen for Europe a Manifesto”.

While Europe, and perhaps other developed countries, may be able to afford a hydrogen economy, the poor countries of the world cannot.

(In actuality, a hydrogen economy is a fantasy. See, Appendix B, in The Looming Energy Crisis, Are Blackouts Inevitable?)

But poor countries can’t afford a hydrogen infrastructure. Most cannot even produce enough electricity to allow their citizens to live in safety and out of poverty. How will they build all the generation capacity needed to produce hydrogen or enough to power battery-powered vehicles (BEVs)?

This is the climate paradox:

Under Europe’s proposals, and the proposals of climate activists here and elsewhere, poor countries will never be able to develop.

Viewed in this light, climate action is a blight on the world.

No wonder undeveloped countries are insisting rich countries pay them to take climate action. This is why The Green Climate Fund was established by the UNFCCC treaty.

Here is reality: India at night. 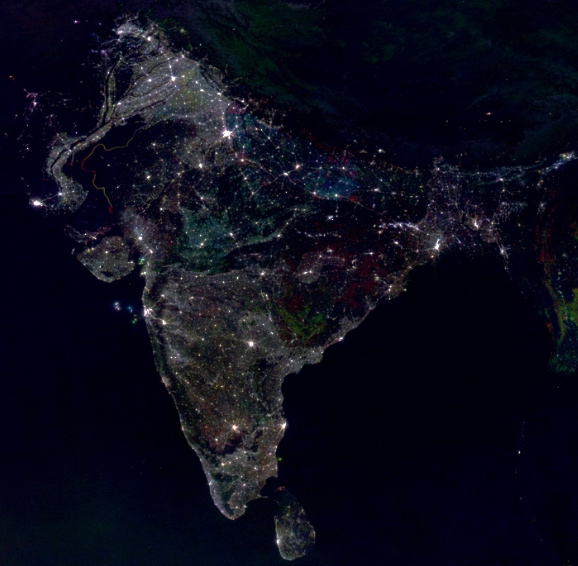 In India, a developing country, the average person consumes only 1,181 kWh per year, while Germans consume six times as much. But India is better off than many.

Why should the people in these countries, and in many other countries just like them, be forced to live in poverty with short life spans?

Thirteen percent, or nearly 1 billion people in the world, have no access to electricity.

The United States should not join Europe and other climate activists in forcing climate action with CO2 reductions on the rest of the world. Climate action is failing and cannot cut CO2 emissions enough to eliminate the so-called CO2 threat.

Scientists are now demonstrating that CO2 is not a threat.

The United States should encourage poor countries to develop their economies using the least expensive means to do so.

Hydrogen, and all the other contrived actions proposed by climate activists should be ignored by developing countries. Colonialism of any kind is wrong.

Developing countries should do what’s best for their citizens.